Need a private and encrypted place to do management collaboration while being remote? Do what the NFL teams are doing for the NFL draft and leverage Microsoft Teams to keep #collaboration high while also staying secure!

Peter King of NBC Sports broke down the process that teams will undergo to make their selections:

“Each team’s designated drafter will be connected to the league’s official Microsoft Teams private and encrypted draft channel, and will make the pick through that channel. There are two fail-safes: A GM can call [NFL’s vice president of player personnel Ken] Fiore or a member of his team directly by landline or cell with the pick. Also, there will be a conference call for the length of the draft with club officials muted; the club official designated to make the pick can unmute his/her line and announce the pick. If the pick is made through Microsoft Teams, Fiore or his representative will announce on the conference call that a pick has been made and the next team is on the clock.”

The NFL Network’s Ian Rapoport further elaborated on the preparations leading up to the draft: 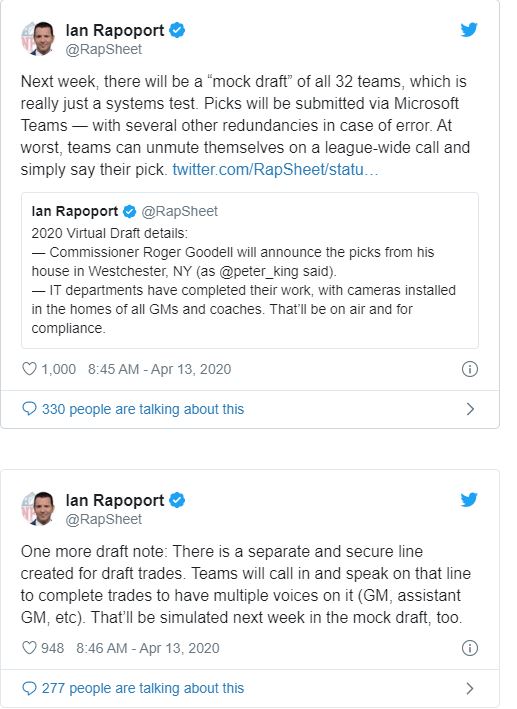 However, King added that “it sounds like the league will be less autocratic about the clock if there’s a legitimate reason (blackout, etc.) for a team to be late with a pick.”

As for the draft picks themselves, they’ll also be remote, with the NFL restricting the number of people on camera to six or less. Even NFL commissioner Roger Goodell will be at his house, presiding over the event from his basement.

As King reported, however, manning the phone lines to discuss trades could be tricky for general managers, with front office staff not in the same room. Los Angeles Chargers general manager Tom Telesco broke down how that might work:

“If there’s multiple teams involved, that’s where it gets a little tricky. That’s what we have to work through. We’re going to have some people who’d usually be at our draft-room table who will probably be connected by video-conferencing. So I can talk to them while I’m on the phone. If there’s a couple of phones going off, I may have one of my kids pick up the phone. It’s all hands on deck. Could have both of my sons with jobs—keeping track of who’s been picked, the board. It’ll be fun.”

And potentially complicated. Certainly unprecedented. But with the coronavirus shutting down sporting leagues across the globe, it’s how the 2020 draft will work.